DotVPN advertises to be better than VPN, although their service doesn't really raise to the standards. There are some things that they are doing right, such as ad-blocking and proprietary DNS, but the low performance, privacy policy issues and slow customer support experience are putting them in a poor light.

DotVPN is a Hong Kong based VPN service that promotes having 700 servers in 10 countries, unlimited bandwidth and unlimited server switches. They actually provide connections to servers in 12 countries, something that is also mentioned in the Chrome Webstore, so it seems that their website isn’t up to date. We weren’t able to find too much information about the company, just the address and some generic business goals.

The only information needed in order to register an account is an e-mail address, which can be done directly through their proxy add-on. This applies to both the free and the paid versions of this product.

They offer an encrypted tunneling add-on for Chrome, Firefox, Opera and they also have mobile apps for Android and iOS. Although they are located in Hong Kong, we found the website is hosted in Germany, and that seems a bit peculiar because in the privacy policy they state that all their customer information is stored in Hong Kong. Wouldn’t it make more sense to also have the website hosted in Hong Kong?

Their mobile apps are using OpenVPN on Android and IPsec on iOS, while the browser add-on establishes an encrypted proxy connection.

The English used on the website is mediocre, and sometimes makes it hard to understand certain aspects or features that are explained.

They have good reviews on the Chrome webstore, 4/5 stars from almost 5000 users at the time of this review. At the time of writing, they have over half a million active users according to Chrome Webstore. This is very promising, but keep in mind that the advertised product is the free version, hence it is normal for a free product to be used by the masses. 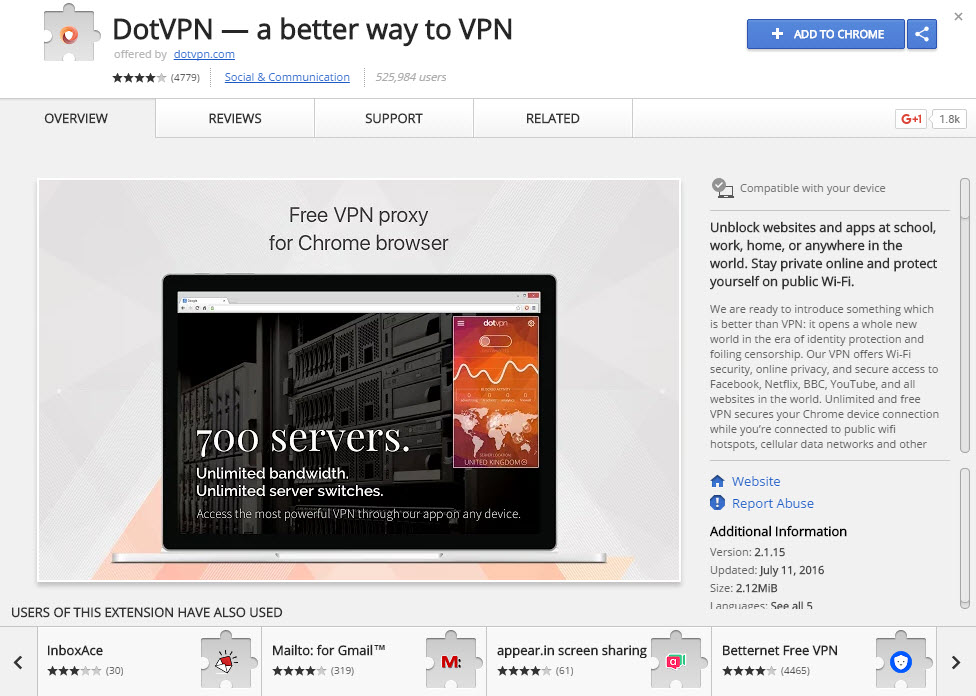 In the Privacy Policy page of their website, DotVPN stipulates that they may collect personal information that will be used solely for display and personalizing user personal cabinet for ease of administration and development services. They also collect the IP address from which you initially connect from and hold it for 24 hours to prevent spam, fraud or other abuse.

Another aspect that they mention is that the algorithms used by them to protect the information can not be hacked by any of the currently existing methods. Taking into account the fact that we are dealing with AES encryption, this is valid for virtually all VPN services, because most of the times, it’s not the encryption algorithms that are the weakest link in the chain, but rather the implementation methods, security of the servers and so on. For more information, you can view their privacy policy here

The service can be used currently as a browser add-on for Chrome, Firefox and Opera and an app for Android and iOS. It is not yet available as a full-feature VPN application for Windows and Mac.

The browser add-on functions well, connects promptly, and has some decent features included. You can find a screenshot of the menus below: 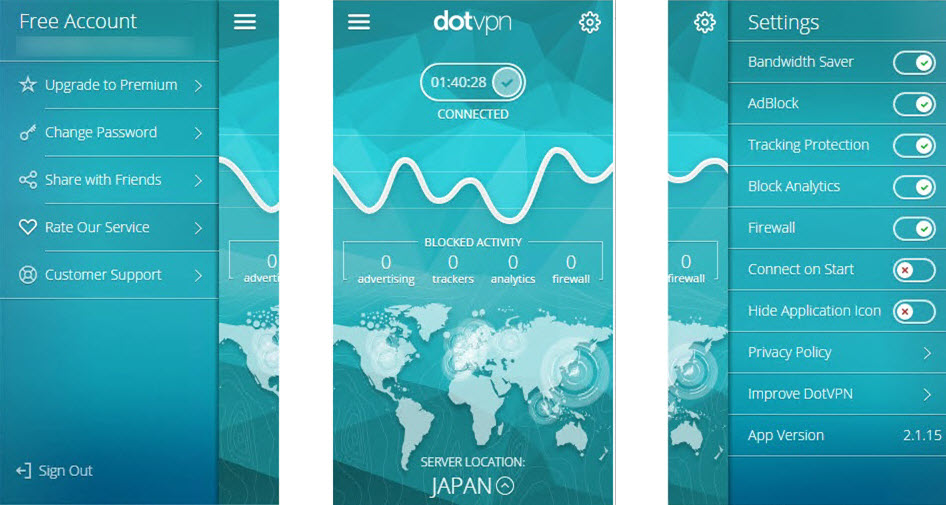 The browser add-on allows you to choose the location and connect/disconnect from it. The rest is just a nice interface that has little functionality in our testing. There are two menus for the settings and the account information that allows you to modify some parameters but we haven’t seen any difference when blocking analytics, starting the ad-blocker or the firewall. It seems like the ad-blocker is always enabled, and there is no clear explanation about what the firewall does: changing Firewall behavior and rules on the OS level is simply impossible through a browser add-on, so it’s unclear what firewall they are referring to.

There is also an option to upgrade your account to premium (or “Turbo”, as displayed in their browser add-on), which we tested but unfortunately it doesn’t seem to change anything as far as the functionality or connectivity methods. We made a before and after test on the free application and the paid one, the connections remained through the same servers and the speed on some of these servers was abysmal. Although they are advertising a “dedicated infrastructure” for their paying customers, we discovered that they are using the same cloud hosting services for their server locations and speed tests were virtually the same as with the free service.

However, we must admit that the design is really nice. Both the browser add-on and the mobile app look the same, which makes things easier in terms of usability. Their website is also modern and good looking.

Even though DotVPN claims to have a good infrastructure, their servers are VPS/cloud based from Digital Ocean and Edis(low-end VPS provider) which most likely explains the slow speeds in some locations. We would have appreciated to see a more solid infrastructure consisting of dedicated servers with some of the top-notch hosting providers.

Another claim is that they have 4096bit encryption which is false. They are referring to the RSA, and even in this case, it’s 2048bit. For the actual data encryption they are using AES 128bit and AES 256bit and RSA is used for handshake and exchanging of symmetric (AES) encryption keys. This claim is just a common marketing gimmick to make it sound that their encryption strength is orders of magnitude better than what others are advertising.

To reiterate, the browser application has a lot of features included in it, but most of them don’t impact the functionality, so turning them on or off will not result in a performance or otherwise visible change.

Netflix and Hulu were not accessible through DotVPN while connected to USA, however we were able to stream from BBC iPlayer without problems via UK location.

DotVPN states that once you upgrade your account from free to Premium, you will have benefits such as powerful a dedicated infrastructure. This turned out not to be true; even after upgrading our account to premium, the connections were still made via VPS/Cloud-based servers, there was no increase in performance.

Be aware that there are lots of ways to leak your real IP address when using a service like DotVPN and it doesn’t come with built-in protection. Blocking WebRTC and Flash Player is a must if you don’t want to expose your real IP address. For DNS they aren’t using 3rd party DNS services like Google, but host the DNS resolvers on the same proxy gateways you connect to.

Even though we were able to get decent speeds on our speed tests, the browsing experience was sluggish. The connections sometimes stalled and basic websites took a longer than average period of time to load. Below you can find our speed test results: 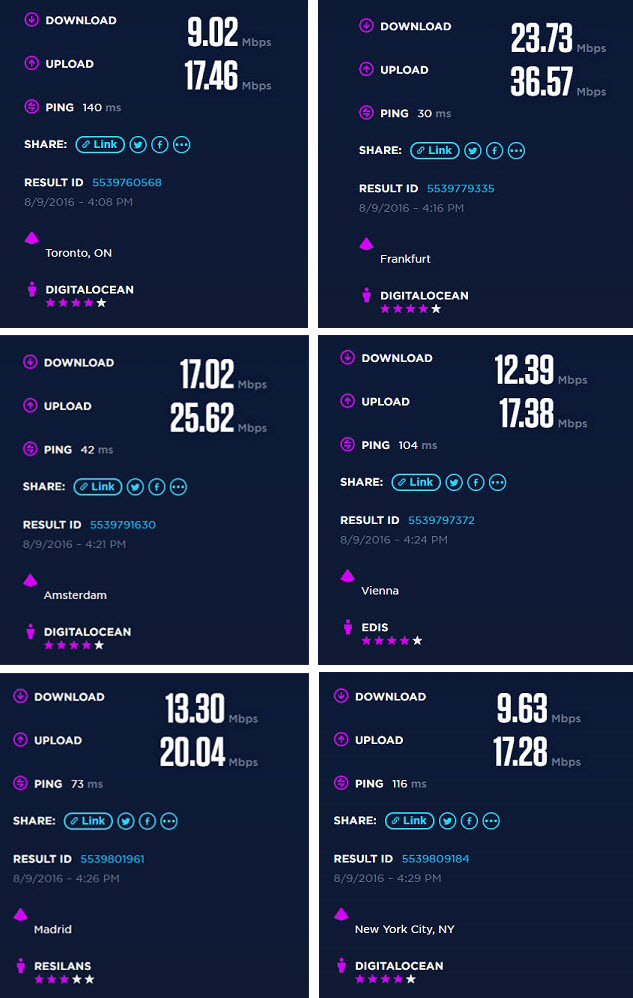 The mobile application performed a bit better than the browser add-on, it was snappier and gave a better response time.

However, the functionality issues were the same and the connection speed was sub-par. The browsing experience was sluggish and a couple of the tested servers did not connect at all. Here is a speed test result that we obtained:

As we mentioned before, DotVPN offer a free service and the possibility to upgrade to premium, therefore a Freemium business model. They have two simple pricing plans: $4.99/mo. or a whole year subscription which would lower the cost to $2.99/mo. (a total of $35.88)

The down-side of the payment process is that they only accept PayPal, they have a grayed out section for credit card payments stating that this feature is not available at the moment, and there is no mention of bitcoin or other privacy-friendly payment methods.

The prices are decent, however, after upgrading, we failed to see a difference in performance or any kind of improvement in the speed and features such as more locations to connect to. .

We contacted the support team via e-mail to get more information on whether the account status modification was a glitch since it was only recognized in the mobile app, and 8 hours later we still had no response. We will assume that this issue will be addressed at some point, it’s just that normally we would expect a bit less of a response time from their end, considering that we opted for the paid service as opposed to sticking with the free version.

Our general opinion about the service was not a good one for a paid service. Regarding it as a free “as-is” service, it is acceptable for general use. There are a lot of issues and lacking features that we would like to see improved or addressed before we can consider it a worthy service. Here is a quick overview of what we like and what we did not:

In short, we feel that the service is a decent one, considering it’s a free service, yet far from being a “better way to VPN”. There are however better, more privacy-focused alternatives as free browser add-ons. The transition from free to premium is rather a placebo because there wasn’t any noticeable improvement or new features. It is still a promising service, new on the market and with a great potential if they improve in the future. That being said, we rate the service 4/10.