Private Internet Access remains one of the best VPNs out there, in this overly-competitive industry.

Our previous review of Private Internet Access VPN is 4 years old, so an update has been long due. Here it is!

Is Private Internet Access a good VPN to use in 2021? PIA has gone through a lot of changes in the past few years, and I will cover most of them in this review.

In case you aren’t familiar with Private Internet Access, here’s some of the key aspects you need to know about this VPN service.

Most important changes and upgrades since our last PIA review

When using a VPN, the user transfers its trust on how his online activity is handled from one entity to another, specifically from his ISP to a commercial VPN service. So here comes the question: do you trust a VPN company more than your ISP?
The answer is a bit complicated, as it varies on many factors, depending on each one’s use-case scenario.

Strictly speaking whether one can trust Private Internet Access or any VPN service for that matter, I’d say it is always good to be precautious about what the VPN provider claims regarding logging policies. Yet, unlike some other VPN services which have been caught giving out info about their users, PIA has a clean record as no users info has been given out.

Another key aspect regarding the trust in PIA is their recent acquire by Kape Technologies, an Israeli based technology firm as a result of its parent company, LTMI Holdings agreeing to a merger. Kape Technologies has also acquired ZenMate VPN and CyberGhost in the past.
Many users have expressed their disappointment as Kape Technologies has a shady background, hence their doubt on PIA’s incentive to protect their privacy.

Kape Technologies was originally founded in 2011 under the name Crossrider, activating into the advertising industry. Their bad reputation comes from creating adware and malware products.

Can PIA still be trusted after this controversial merger acquisition? We wish we could have a clear answer to that, but it isn’t just black and white.

As one would expect from a solid VPN service, PIA has support for all major platforms and devices.

Their VPN client app is available for Windows, macOS, Linux, Android, iOS. Since our previous PIA review made 4 years ago, their apps have gone through a re-design and are looking much better now, focusing on simplicity without sacrificing functionality.

PIA’s VPN apps feature the same design across all platforms. It’s likely a matter of taste, but personally I like the mobile more than their desktop one, even though the design is the same. What I don’t really like about it its window size. On mobiles it fits just fine the whole display as one would expect, but on a high-resolution desktop/laptop display it is too small.

A proxy browser addon is available for Chrome, Firefox and Opera, but works fine with other browsers derived from Chrome or Firefox, Brave browser being one of them. The browser addon isn’t technically a VPN, but an HTTP proxy over TLS.

The VPN connections can also be set without using their apps, either using OpenVPN by importing the configuration files.

It is also worth noting that their apps’ code is open-source and can be found on their GitHub repository.

WireGuard VPN protocol is supported starting this year and that is nice, since WireGuard can be faster and less resource-hungry than OpenVPN. If you don’t know about WireGuard yet, check our comparison article OpenVPN vs. WireGuard to find out which one is best for your.

WireGuard connectivity works using their VPN apps and it is enabled on all their server locations. It’s important to be aware that, as mentioned, WireGuard can’t be used with PIA other than with their app, at least not yet, and this is bad news for those looking to set WireGuard connections on routers.

SOCKS5 proxy support is available, useful for torrenting so that only the torrent client hides mask your real IP address from trackers and other peers, including copyright trolls.

ShadowSocks is available with their VPN apps and it acts as a proxy for OpenVPN, adding an obfuscation layer. This option might help in countries like China, UAE and others where the ISPs are detecting normal VPN connections and block them.

PIA MACE is DNS blocking feature that gets rid of unwanted ads, tracking and malware domains. It is quite similar to well-known DNS blockers like AdGuard, NextDNS and it does a fairly good job. It is useful on mobile devices stopping in-app annoying ads, but on desktops/laptops there are better alternatives like uBlock Origin.

PIA MACE isn’t available as system-wide blocker on iOS, being replaced with a Safari plug-in. But here is what you can do to have system-wide blocking of ads, trackers and malware domains on iOS: you can set a blocking DNS service like AdGuard, NextDNS or similar in the PIA app’s Settings.

The encryption ciphers used by OpenVPN can be selected in the apps settings, and they include the following:

The AEAD ciphers (AES-128-GCM and AES-256-GCM) should be the options of choice, but in case you want to use the CBC ones for any reason, you can also set the data authentication to SHA1, SHA256 or None.

A few years ago there were only the AES-CBC ciphers available, so the addition of AEAD ciphers is a good upgrade in terms of security.

For WireGuard, these are the encryption parameters:

These are the standards settings of WireGuard, you can read more about on the official WireGuard site.

What protocol to use with PIA?

In terms of security, both OpenVPN (with the ciphers listed above except for ‘None’, obviously) and WireGuard are very good and have their own advantages. OpenVPN is resource intensive and it really shines when it runs on hardware with CPUs that have AES-NI acceleration, which isn’t the case on mobile device.

Overall, I’d say that WireGuard should give better results in terms of speed and reliability than OpenVPN, especially on mobile devices.

As of today, PIA has over  20,000 VPN servers in 76 Countries and a total of 97 locations. The number of locations is larger than actual number of servers as they also include virtual locations. Over half of their servers are located in the USA, Canada and UK. 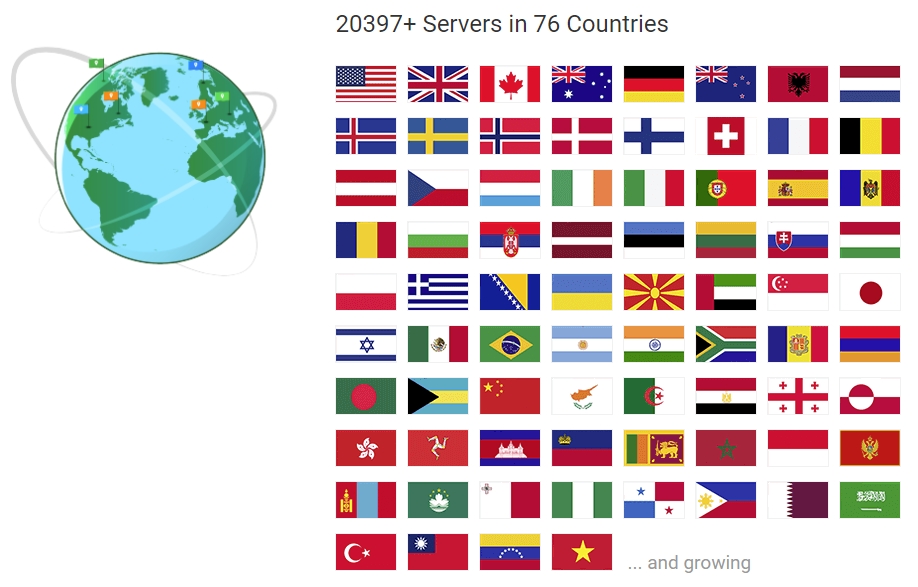 In the summer of 2020, they announced the so called “Next Generation” or “Gen4” network, consisting of a major infrastructure hardware meant to improve network performance and security. This Next Generation upgrade brings new VPN locations along with a major upgrade in some of the existing locations by increasing the number of existing servers from 3500 to over 20000.

It is worth noting that the new Next Generation servers feature 10 Gbit servers connectivity, and with this upgrade they have introduced support for “Geo-located” virtual locations. What is a “geo-located” virtual location? it is a server physically hosted in one country having its IP information tied to other country. This “trick” allows to have a virtual presence in some exotic locations while the servers are actually located elsewhere, thus allowing to cover more countries. This isn’t new, as the practice has been common in the VPN industry, though what is different with PIA is that they label these locations as “geo-located” to make it clear what they are about, while some other services are silent about the virtual IP locations.

All the servers are torrent friendly, meaning that P2P traffic isn’t blocked.

Speed with Private Internet Access has almost always been very good in our tests throughout the years and the recent test results are even better. While OpenVPN speeds are ranging from decent to very good, given the fresh WireGuard implementation we’ve decided to focus a bit more on the WireGuard results. And it’s been a very pleasant surprise.

US WireGuard servers, connecting from Chicago on a 1 Gbit connection:

Looking at the speed test results, it is a an obvious conclusion that WireGuard is much faster than OpenVPN. But then again, results may vary. It depends on many factors and different users may get different results.

Some more speed test results, by connecting from other locations than US, will be added in a few days.

Service price starts at $9.95/mo. and discounts are available for longer-term subscriptions. For instance, the 1 year subscription cost is $39.95, currently coming with 2 months free service extension as a bonus.

Longer term subscriptions like 2 or 3 years are not available, which is a shame, as the 2 years used to be available some while ago.

A library consisting of help articles and guides is available on their site and they cover most info one would look for.

Assistance is also provided via ticketing and a live chat. Note that the live chat isn’t available around the clock.

Other ways to reach for support is via their forum or on reddit.com where you can receive help either from their employees or other PIA users.

Private Internet Access remains one of the best VPN services out there, in this overly-competitive industry. They continued to innovate, expand and respond to users’ demand in all these years and I feel that they’re doing so at a faster pace recently than some years ago.